Status: 202 Accepted - the message is on it’s way, but has not yet been confirmed.

Set header.txtype: "none" to disable pinning of the private message send to the blockchain. The message is sent immediately (no batching) over the private data exchange.

Example 3: Inline object data to a topic (no datatype verification)

It is very good practice to set a tag and topic in each of your messages:

Notes on why setting a topic is important

The FireFly aggregator uses the topic (obfuscated on chain) to determine if a message is the next message in an in-flight sequence for any groups the node is involved in. If it is, then that message must receive all off-chain private data and be confirmed before any subsequent messages can be confirmed on the same sequence.

So if you use the same topic in every message, then a single failed send on one topic blocks delivery of all messages between those parties, until the missing data arrives.

Instead it is best practice to set the topic on your messages to value that identifies an ordered stream of business processing. Some examples:

The topic field is an array, because there are cases (such as merging two identifiers) where you need a message to be deterministically ordered across multiple sequences. However, this is an advanced use case and you are likely to set a single topic on the vast majority of your messages.

Example 3: Upload a blob with metadata and send privately

2) Privately send a message referring to that data

Example curl command (Linux/Mac) to grab an image from the internet, and pipe it into a multi-part form post to FireFly.

Note we use autometa to cause FireFly to automatically add the filename, and size, to the JSON part of the data object for us.

Status: 200 OK - your data is uploaded to your local FireFly node

Just include a reference to the id returned from the upload.

All of the functionality discussed above can be done through the FireFly Sandbox.

To get started, open up the Web UI and Sanbox UI for at least one of your members. The URLs for these were printed in your terminal when you started your FireFly stack. 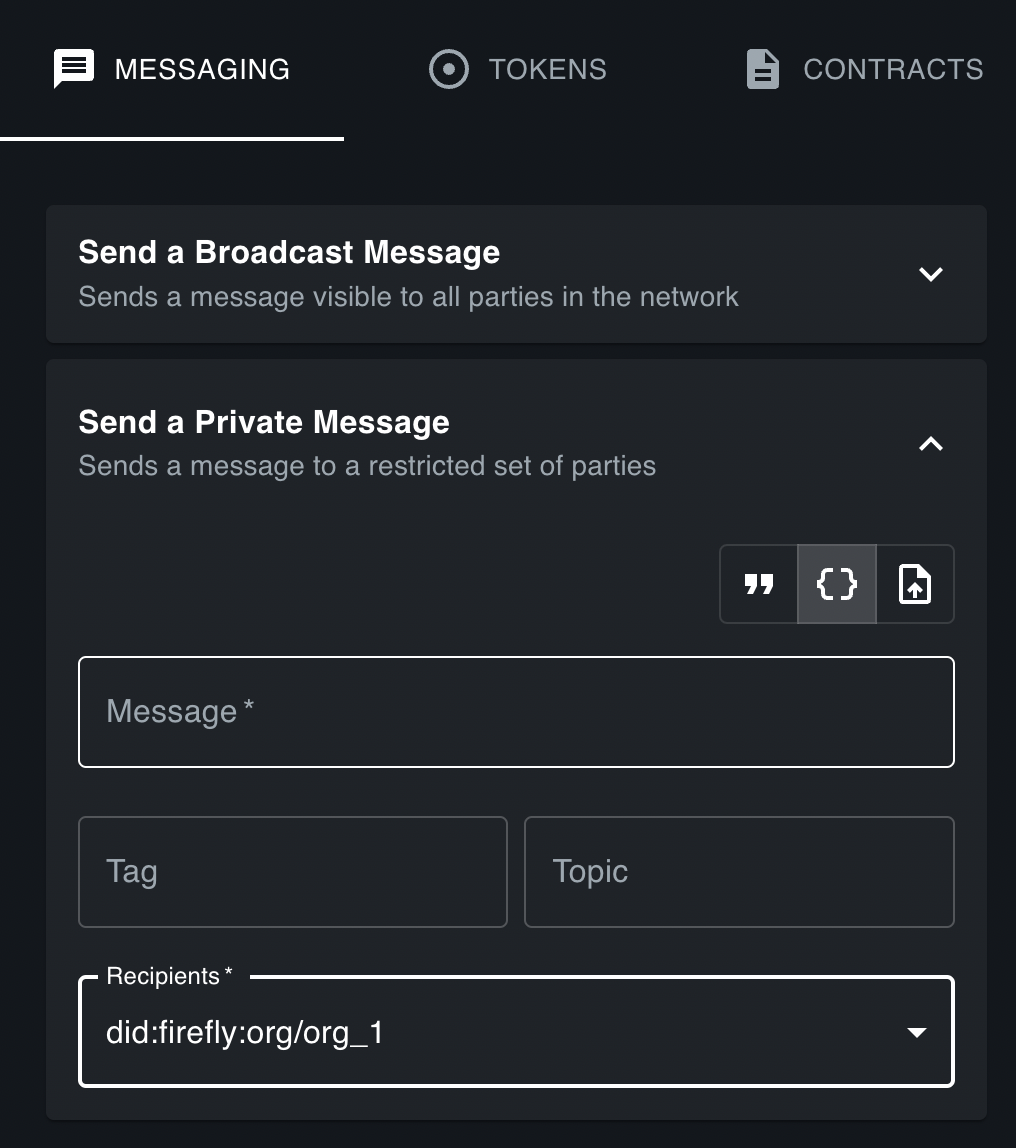 Notice how the data field in the center panel updates in real time as you update the message you wish to send.

Click the blue Run button. This should return a 202 response immediately in the Server Response section and will populate the right hand panel with transaction information after a few seconds.

Go back to the FireFly UI (the URL for this would have been shown in the terminal when you started the stack) and you’ll see your successful blockchain transaction. Compare the “Recent Network Changes” widget With private messages, your